October 02, 2017
I have not yet mentioned here on this platform how my husband and I became that - husband and wife! What a fun ride and a story I love to share.

Josh lived in NYC and visited his family in Houston where I lived for Christmas 2011. He grew up with my best friend Christina in Saudi Arabia and she dragged me out to meet him for a drink. I had zero interest in going out that night but relented after Christina made a bit of a stink about it. Boy am I glad I did!! 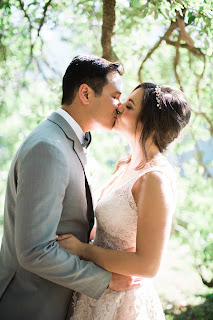 I can still see Josh walking out of his parents house to get into the car in my mind's eye very clearly - he was very good looking and wore a plaid button-down shirt. He and I immediately hit it off and he came to the yoga class that I taught two days later even though he had never been to a yoga class before, ever! It was so sweet and I was touched, not only was he hot but he was adventurous and clearly interested in me too.

Three months later, I moved to NYC!! I visited him twice during that time between our meeting and my moving and we started dating officially soon after I got there. I still remember all of those feelings of excitement and disbelief so viscerally that I get butterflies just thinking about it. We moved in together about 8 months later and the rest is history.


Just before our going away party to celebrate our move from NYC to LA in December 2015, he popped the question! He said that he could not imagine going on life's adventures with anyone else and I agreed wholeheartedly. I then spent the next 16 months planning our beautiful and whimsical wedding from afar <3

Popular posts from this blog

Himachal Pradesh, India: The Land of the Gods

September 01, 2014
Chandratal, Lake of the Moon I don't have the adequate words to describe the beauty and wonders of the Indian Himalayas and the Himachal Pradesh in a meaningful or comprehensible way. The diverse and remarkable landscape, scenery, culture, food, people and experience are beyond measure. What at first glimpse seems like complete disarray reveals itself as organized chaos - much more organized than a westerner might expect. I must admit that I, initially, had slight reservations about the trip in monsoon season; there is a great likelihood of landslides and floods on the perilous roads after all. I like to think that we were blessed with the beautiful unimpeded journey that we had. Blessed not only because we held positive thoughts, but also because it was due, dammit. After the loss of three close and precious souls in only four months, it was time for good things. Jamaica's Campsite at Chandratal with Rishi & Raju After reading countless travel experiences
4 comments
Read more

October 10, 2017
10 years ago I was introduced to yoga 9 years ago I expanded my horizons by traveling across Europe for 10 weeks visiting  28 cities in 15 countries 8 years ago I was diagnosed with a serious medical condition that I have since healed naturally 7 years ago I traveled to my ancestral homeland of Italy and developed overdue bonds with my sister 6 years ago I traveled to Costa Rica alone, realized it was my life's calling and passion to share yoga, graduated with my MBA and completed my first yoga teacher training program 5 years ago I packed my four bags, left my hometown of Houston, Texas, moved to NYC and continued my endeavor for growth 4 years ago I moved in with my best friend and love of my life 3 years ago I grieved when a friend who was like a little brother, one of my closest girlfriends, my dad and my dog departed this earthly plane. I completed my second yoga teacher training program and backpacked across the Himalayas of Northern India where I learned more about m
Post a Comment
Read more

October 27, 2018
I had always known that when the time came I would want a natural birth without an epidural. So last October when I found out that I was pregnant I knew I had to do my research to find the right place to give birth. With the business of birth being so huge, it is really our duty to be our own advocates and research to understand the implications of the socially accepted birth practices in this country (USA). For me, a natural and unmedicated birth was of utmost importance but birthing centers are not covered by my insurance so I chose to deliver at a hospital in Houston that has a midwifery division and I am so happy with my choice! Life is a bit different these days.  I was just thinking about how my brain has been on sabbatical for what seems like an eternity - throughout the entirety of my first pregnancy and now the past couple of months. I am 4 months post-partum and am just now beginning to re-access the majority of my vocabulary. What better time than now to write out my birth
Post a Comment
Read more